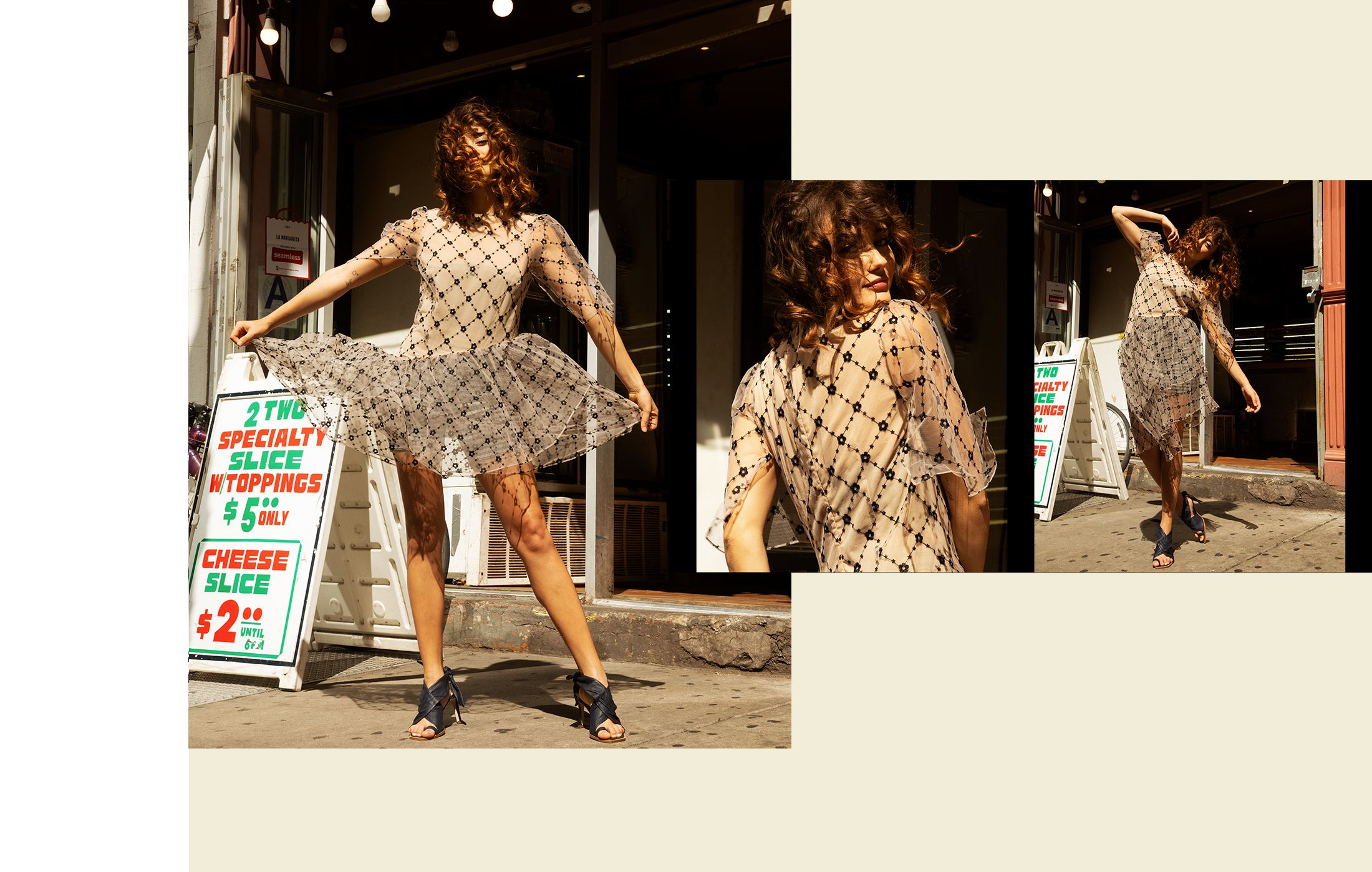 Before I landed my dream job at Who What Wear nine years ago, I worked as a waitress at a fancy establishment in my hometown, a personal fact I contribute to the immediate kinship I feel with actress Ella Purnell upon speaking with her. To be fair, Purnell is not actually a waitress, though she does play one on the Starz series Sweetbitter, a role that allows us to bond for a full 10 minutes over the “mental” restaurant industry; the long hours, the romantic relationships that inevitably form, and of course, the drama. We LOVE the drama.

My phone call with Purnell takes place days after she wrapped a whirlwind NYC press trip (and this shoot!) for the second season of Sweetbitter, which premiered last Sunday. She is back in her hometown of London working on her next project, the corset drama Belgravia, which is set for 2020. It’s been nonstop for the actress, but despite the fact that it’s 10 p.m. her time and she is just getting home from a long day of filming, I’m greeted with a cheerful tone on the other end of the line. We dive straight into the important topics: fashion, career, and Sweetbitter and Tess, a character whose personal growth experiences on the show are coincidentally mirroring Purnell’s own. “It’s kind of funny how those things work out,” she tells me of the similarities between herself and her on-screen counterpart. This may be the year Tess happens to life, as Purnell puts it, but it’s also the year Purnell happens to life, revealing it’s been one full of intriguing career firsts. Oh, what a thrilling time to be the 22-year-old.

Keep reading for my full conversation with the actress, where we discuss the exciting next chapter of Sweetbitter, getting her fashion education from Chanel, and the British-girl summer wardrobe.

Sweetbitter season two! What can we expect from this next chapter of the series and from Tess?

I always like to think of it as season one, life happens to Tess. She is a completely blank slate, you know nothing about this character, and you meet her and learn with her. It’s kind of like an introduction to what is going to happen. Season two is where we really get into everything. So season one is life happens to Tess, and season two is Tess happens to life. We delve into all kinds of themes that transcend time and generations and really get to know all of the characters’ backgrounds and storylines and vulnerabilities. For Tess, it’s about power; it’s about finding her voice, and she goes from being curious about life to voracious about experiencing. She learns what she likes, what she wants, what she deserves, and she learns how to ask for it, which I think is a really important thing for anyone. There comes a time in everyone’s life where they have to decide who they want to be and what kind of person they want to be, but I think especially that is a really important thing for women, to stand up for yourself and say you know what, I do deserve that promotion, I do deserve that pay raise. It’s been really fun to actually experience that in my own life while playing it. It’s kind of funny how those things work out.

What about Tess as a character excites you?

I think what I was really concerned with back in season one when I first met Tess was about making her likable. I was quite stressed about this girl you know nothing about. How am I going to make her relatable to the audience? And [creator] Stephanie [Danler] blankly looked at me and said, “Why do you want to make her relatable?” and it kind of all clicked. That’s where the joy came in for me because you get to build on everything, every experience she has shapes her, and you get to live that with her because there is nothing really to her before she moves to New York. For season two, there is definitely no concern of making her likable, in fact, it’s the opposite. And that’s the thing, you are taught that you have to be nice, you have to be accommodating, we have to make ourselves smaller for other people to take up space. This time it’s about I don’t actually give a fuck about what you think of me. I don’t give a fuck about this. I’m standing up for myself, and the way you are treating me is not nice. It’s tough to do that, and she will learn from it and make mistakes, but it’s wonderful to play outside the stereotypical box of being a young girl.

What is the most interesting or surprising thing you’ve learned about the restaurant industry?

To be honest, everything. I kind of knew about the long hours and the community of working with everyone, but I didn’t know particularly about food and wine and the higher level of cuisine and posh restaurants. I suppose it was the experience of food. I think I underestimated that. It’s this whole kind of art form almost. I didn’t know anything about that, and I learned a lot of that through Stephanie, who is kind of like my Simone I guess. And I guess to appreciate eating not just because you are hungry, but as something you should enjoy and appreciate. I’m now that wanky person who swirls wine around and talks about flavors and complexities and notes and things like that. Most of the time I’m making it up, but I do a really good job of tricking everyone.

What is a dream role for you?

You know this year for me was all about firsts. I was a child actor and I had to do that awkward figuring out who you are thing, but also while working. So I took a bit of time off, made that transition from child to adult actor. I really wanted to push myself, I really wanted to try new things, and boy did I get what I wished for. I am doing a period drama with corsets and bonnets, and my next thing is a zombie movie with Zack Snyder, which is the complete opposite. It’s an action film, which I’ve never done and is pretty exciting. You know what I really fancy doing is a drama, maybe something in nature, like Into The Wild or something like that. Or something musical… something like A Star is Born, a biopic.

Can you name an actor whose choices in roles you admire?

Oh, absolutely. My favorites would be Helena Bonham Carter, Nicole Kidman, Saoirse Ronan, Margot Robbie, and Olivia Coleman. They are my top five favorite actresses, and I adore watching everything they are in. If you look at the longevity of their careers and the variety of the roles they play, I’m honestly in awe of them.

Let’s switch gears and talk fashion. You have been working with Chanel a lot lately. Can you tell me about that relationship?

I mean, it’s like a girl’s dream, isn’t it? I’m so fortunate. I cannot remember for the life of me how it came about. I think it was just that I was going to an event and Chanel very kindly offered to loan me a dress and I obviously adored it, chose it, fell in love with it. And then you have to do that thing where you become Cinderella and have to give it back by midnight, which is very sad. Something I really admire about the brand is it is timeless and it’s been around for so long, but it is constantly evolving and has such a variety of looks. It’s very classy and gorgeous elegance, but it’s also so fun and young and cool and trendy. I’ve really loved lately choosing pieces and then pairing them with some of my own stuff or my mom’s own stuff, like vintage pieces, and modernizing it. I like that I can go out in a tweed suit and be very Coco Chanel, but I can also make it ’90s or ’80s and grunge. I didn’t know, and I still don’t know, the first thing about fashion. I have style and can dress myself, and I’ve always enjoyed it, but I didn’t know anything about brands and houses, you know anything like that. And Chanel was really like my baptism into all of that. It’s actually very similar to the dining experience where you start to appreciate fashion as an art form and as a way to express for yourself. I get very philosophical about how you dress yourself; it’s more than just clothes, it’s a costume, it’s a front, it’s armor, it’s a way you communicate before even opening your mouth.

Do you have a favorite Chanel item you own?

I love all of the lipsticks. I know that’s not clothing, but Chanel lipsticks are fantastic. They stay on forever and don’t smudge. Oh, you know what it is? It’s a black blazer. I bought a Chanel black blazer last year, and it’s so good. You can kind of grunge it up or wear it smart. It’s a great staple. I feel like I’m going to have it forever.

What would you say are five pieces all British girls have in their summer wardrobes?

Well, listen, I do think it depends. Girls from Chelsea and girls from Shoreditch dress very differently. But I’m just going to take the stereotypical cool young London girl. I’m going to say, I don’t know what you guys call them, but we call them fanny packs. I think a cool bum bag and a pair of black boots. It doesn’t matter how hot it is, or that it’s summer, every girl has a pair of black boots. Like Dr. Martens cool, grungy black boots. A pair of vintage blue high-waisted mom jeans and hair accessories. They seem to be all the rage right now and everyone is wearing them out. Those and rings. British girls love a ring. We always kind of layer them up and wear like six or even a couple of dainty ones. I always wear loads and loads of quite like gothic, silver rings. There is this ring store called the Great Frog that just came to L.A., but it started in London. It has the best rings. And a good pair of sunnies. I have to add that in there.

Okay, before I let you go, is there a specific item you are eyeing for summer?

You know what, a mid-length floaty floral dress. I don’t have any summer dresses, but I think there is a way to make them cool with trainers. I’ve got an image of one I’ve really wanted, and now I think I’m going to buy it.

Like what you see? Check out more from our summer TV takeover with Stranger Things’ Sadie Sink and Euphoria’s Hunter Schafer.