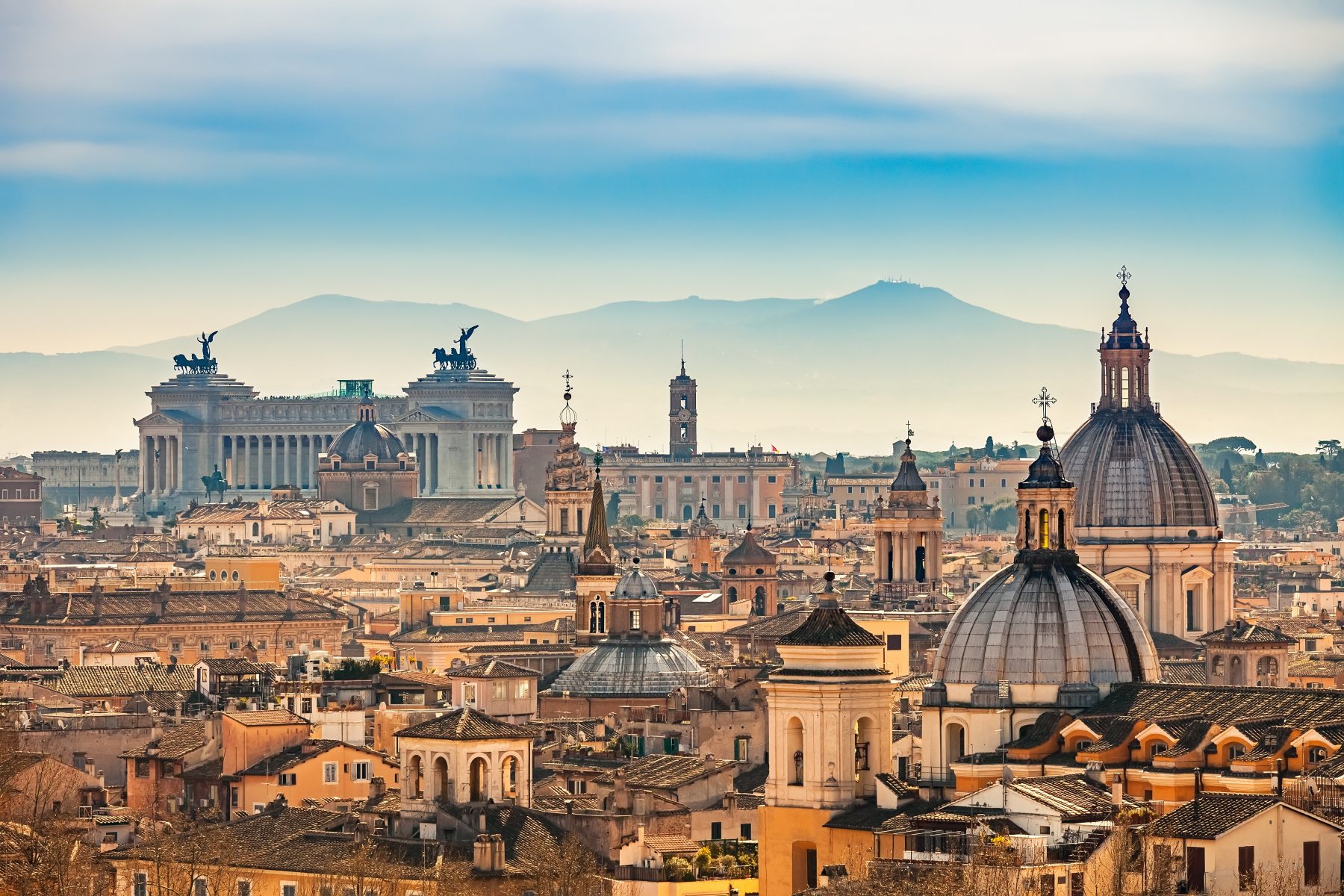 Rome in 3 Days? You’d Be Shocked at How Much You Can See If You Follow This Guide

INSIDER SECRET: Rome has an incredible public transportation system that is easy to use and can get you around the city quickly.

Rich in history, sights and experiences, Rome is one of the world’s great cities, You can easily spend a whole week there without running out of things to do. Not everyone, however, has a full week to devote to Rome, so the question is: Can you see Rome in three days?

Can You See Rome in as Little As Three Days?

Rome is an efficient city to explore because of how closely everything is packed together. Here’s how you can see all the major sights of this marvelous city in just three days.

During the first day, we explore Ancient Rome, the capital of the Roman Empire with its architectural marvels that still stand today.

Nothing in Rome is more iconic than the Colosseum. Built in 72 AD (finished in 80 AD), it was the world’s largest amphitheater, seating as many as 80,000 spectators for mock sea battles, gladiatorial events and other public spectacles.

Take the blue line metro to the Colosseo stop. As soon as you step out of the metro station you will see the stadium towering above you.

It opens at 8:30am every day and I recommend lining up before 9am. Whatever you do, make this the first stop of your day. By about 10am the lines can take 1-2 hours to get through.

Most people can visit the Colosseum in 30-45 minutes. Even I, a history buff who took extra time to read everything in the museum rooms upstairs, was done in under an hour. That includes the audio tour.

Not everyone has heard of the Palatine Hill, but this was the home neighborhood of ancient Rome’s top 1%. It was home to senators, emperors, successful businessmen and other influential people. You can still wander through the magnificent mansions and bathhouses that overlooked their downtown (the Roman Forum) to the north, the Colosseum to the east and Circus Maximus to the south.

The Palatine Hill is Rome’s best-kept secret. There is almost no line to enter and no entrance fee (if you have already been to the Colosseum, it uses the same ticket). It has beautiful gardens and views of the entire ancient capital.

Wander through at your own pace, but before you exit to the north, be sure to take a moment to take in the only aerial view of the Roman Forum. Expect to spend 45-60 minutes exploring the area. When you are done, head down the steps into Roman Forum (no need to wait in a long line like the people who try to enter the forum directly).

The forum was ancient Rome’s busy downtown. There were temples, courthouses, farmers markets, red-light districts and more in these busy streets.

You will need an audio tour to appreciate the history and to understand what each building was. This is probably my favorite attraction in all of Rome, but I am a history buff and these streets have stories to tell.

There is a small building in the middle of the central square that many visitors walk right past. Go inside to see the burial site of Julius Caesar.

As you leave the forum, hop back on the metro and take it one more stop to the Circo Massimo stop. Get off here and walk up the stairs to a huge sprawling park filled with ruins. This is the site of Circus Maximus.

While not as popular and well-known as the adjacent Colosseum, this oval-shaped stadium actually held more spectators (over 150,000, more than any modern mega-stadium) and more frequent events than the Colosseum.

Spend 15-60 minutes exploring these grounds. This is now a public park and there are nearby street vendors which makes it a great place to grab food and enjoy a picnic.

If you have time and find the history interesting, you can head east from the Circus Maximus onto the Appian Way. This ancient road was the Route 66 of its day. The largest and longest road in the Roman Empire, it went all the way across the peninsula to the port of Brundisium, connecting Rome to the Adriatic Sea and on to Greece, the Mediterranean and Egypt.

The old saying, “All roads lead to Rome,” was referring to the Appian Way, which connected Rome to its empire.

Once you are done with the Circus Maximus, you can get back on the metro again, heading the same direction, and continue just one more stop to the Piramide stop.

Here you can explore the Pyramid of Cestius. Yes, there were pyramids in Rome.

You have now visited all the major sights of the ancient Roman Empire. The Piramide stop is also a great place to eat.

Today’s focus is on the streets and shops of modern Rome.

Start by climbing the Spanish Steps — a great morning workout with 136 steps to the top — and from there you can look out over much of modern Rome.

If the steps are too strenuous, you can go around the corner to the metro station and ride an elevator to the top.

Back down the steps, keep going straight ahead. You will walk onto Via Condotti and into Rome’s primary shopping district, lined with shops selling Italy’s famous fashion brands plus many local specialty shops.

If you enjoy browsing and shopping, it is easy to spend hours in this district.

In roughly the same neighborhood, you will come upon the Pantheon, an ancient Roman temple still standing today as a mausoleum and church. It is probably the most well-preserved building from ancient Rome.

You can explore the inside of the Pantheon for free. Like other great attractions in Rome, the earlier you arrive the better as the number of visitors in the building at any given time is limited. Lines don’t accumulate as long as other Roman attractions. Even during busy times expect to wait less than 30 minutes to go inside.

Most people spend 15-30 minutes inside the domed architectural masterpiece.

Piazza Navona is a short walk from the Pantheon. The beautiful piazza, bustling with locals and tourists, is lined with shops and restaurants.

In the center is a beautiful fountain, Fontona dei Quattro Fiumi or “fountain of the four rivers,” by the famed sculptor Bernini. It depicts the spread of the pope’s authority throughout the world, bringing together the four great rivers  — the Nile (Africa), the Danube (Europe), the Ganges (Asia), and the Rio de la Plata (America) — and their associated river gods.

Once you are done shopping at the Piazza Navona you can loop around to see Largo Argentina. The site consists of ruins that are about four blocks long and two blocks wide. This was where Julius Caesar was assassinated on the Ides of March in 44 BC.

You have now completed a loop through modern Rome  — shopping, browsing and sampling a few scoops of gelato and a shot of espresso along the way.

You can finish your day at the nearby Trevi Fountain, best seen at night. If it isn’t dark yet, get dinner at one of the many restaurants nearby and come back after sunset.

The fountain is not only massive but at night it is beautifully lighted. It’s worth reading about the fountain and its rock carvings. It was originally the center of the city where the Roman aqueducts ended. Leftover water was drained into the fountain.

It was famous in ancient Rome because it symbolized the abundant resources of the empire. Few cities at the time had running water, yet Rome had so much that it could celebrate its excess.

The Vatican is technically an independent country, landlocked inside of Italy, but most people consider it part of Rome. It is the headquarters of the Roman Catholic Church, but you don’t have to be Catholic to appreciate this place. It contains the largest private art collection in the world and is home to the famous Sistine Chapel.

The Vatican is also the busiest attraction in Rome with more visitors each year than the Colosseum.

You will not be able to visit The Vatican on Sundays, so you may want to re-arrange this itinerary if Day 3 lands on a Sunday. On Wednesdays the Pope makes an appearance in St. Peter’s Square (behind The Vatican) so this day is usually extra busy, but it might be worth going if you want to see the Pope from far across a sea of tens of thousands of people.

Be sure to get in line for The Vatican Museums as early as possible. By midday it can take four hours to get through the line and enter. If you arrive before 9am, you shouldn’t have to wait longer than 30-45 minutes.

Don’t buy tickets ahead of time. You still must wait in the same line and all three times I have gone, I bought tickets at the museum and got in ahead of my linemates who had pre-purchased theirs.

Containing the largest private art collection in the world, the Vatican Museums are sprawling. The art is both secular and religious. You may want to rent an audio tour to understand what you are looking at. Most tours take 4+ hours to complete, at which point you enter the Sistine Chapel.

Arguably the most beautiful work of art in the world, the ceiling of the Sistine Chapel is remarkable. You don’t have to be religious to appreciate it, but consider getting a guided tour or audio guide, or bring your own study materials.

It is usually standing-room-only, and no photos are allowed in the chapel. There are a few benches on the side you can use if you need to, but you will almost certainly have to wait to sit. Most people spend about one hour here.

If you also want to see St. Peter’s Basilica, leave from the back-right door of the Sistine Chapel. This will take you through some winding halls and into the basilica. The other exit will put you on the street and you will have to walk halfway around the Vatican and wait in line again.

St. Peter’s is the largest church in the world. The architecture is fascinating and its sheer size is a marvel. The interior is filled with masterpieces of Renaissance and Baroque art, the most famous of which is Michelangelo’s Pietà.

For an additional fee you can go to the top of the basilica tower and see Rome from its highest point. Add 1-2 hours if you plan to do this. The rest of the basilica will take about one hour to visit. Add additional time if you are visiting for religious purposes.

It will be a busy three days, but following this loose guide, you can easily see all the major sights of Rome. You will even have time to shop and enjoy Roman food and delicacies.

Don’t leave Rome without trying some espresso (it is amazing), some scoops of gelato, and a slice of tiramisu.

What did I miss? Are there any other hot spots of Rome that visitors need to see during a three-day journey?

For the latest tips and tricks on traveling big without spending a fortune, please subscribe to the Million Mile Secrets daily email newsletter.