Pew: 30% of U.S. adults have used online dating; 12% found a committed relationships from it

Dating app usage in the U.S. is on the rise, but so are the issues it brings. According to a new Pew Research Center report on online dating, out today, 30% of U.S. adults have at some point used a dating app or website. That’s up from just 11% in 2013. A smaller number of U.S.adults, 12%, said they found a long-term relationship via online dating. In addition, a majority of users reported an overall positive experience with online dating. But when drilling down into specific areas, some significant issues around harassment surfaced.

The study found that 37% of online dating users said someone on a site or app continued to contact them after they said they were not interested. 35% said they were sent an explicit message or image they didn’t ask for, and 28% called them an offensive name. A smaller percentage (9%) said they were threatened with physical harm.

Across the board, these numbers were much higher for women than for men, the study found.

48% of women using online dating said someone continued to contact them after they said no; 46% received unwanted explicit images; 33% were called offensive names, and 11% were threatened with physical harm.

For younger women, these figures shot up even higher.

Six-in-ten women ages 18 to 34 using online dating services said someone via a dating site or app continued to contact them after they said they were not interested; 57% received unwanted explicit images; 44% were called offensive names, and 19% were threatened physically.

Younger adults were also more likely to be using online dating apps or websites than older adults. This is likely due to a combination of factors, including the younger generation’s comfort and ease with newer technology, as well as the fact that many older users leave dating apps because they eventually find themselves in long-term relationships.

Pew found that LGB adults were also twice as likely as straight adults to have used a dating app or website, at 55% to 28%.

Another interesting finding from the Pew study is the success rate of online dating.

Dating market leader Tinder has more fully embraced the younger demographic in recent months and now targets users looking for a “single” lifestyle where dating remains casual and settling down is years away. As the largest, most successful dating platform in the U.S., raking in $1.2 billion in 2019, Tinder is capable of driving industry trends. 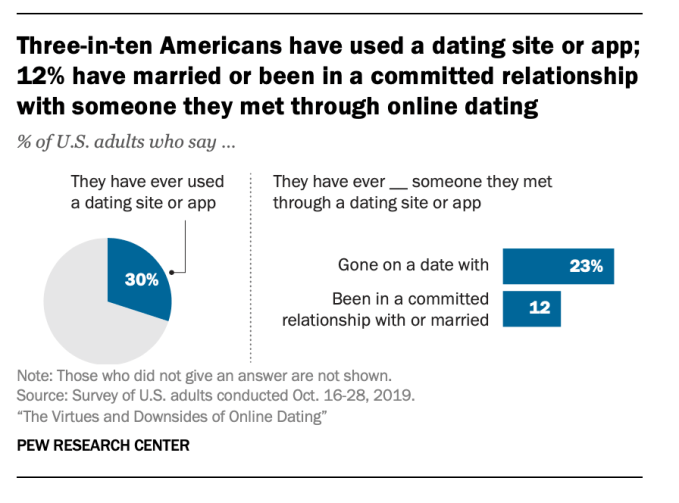 There were some differences between the 2013 survey and today’s, but the overall trend towards increased usage and improved results remains accurate, Pew says.

Despite the issues associated with online dating, more people (57%) reported a positive experience compared with a negative one (42%). But overall, Pew found that people were fairly ambivalent about how online dating apps and sites impact dating and relationships in America. Half of Americans believe the apps have neither a positive nor a negative impact, for example. 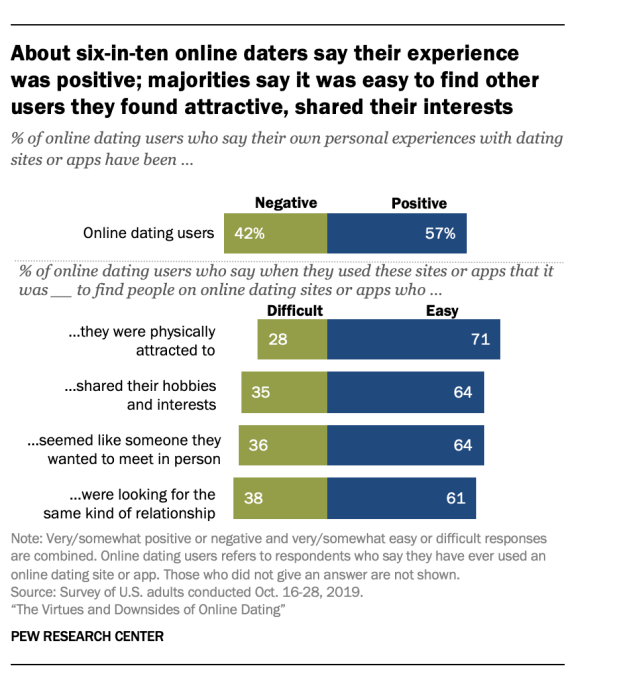 But when current dating app users were asked how the platforms made them feel, more said they felt frustrated (45%) instead of hopeful, pessimistic (35%) instead of optimistic, and insecure (25%) instead of confident. This is despite the same group of users saying they found it easy to find people they were attracted to online who seemed like someone they wanted to meet, among other positives. 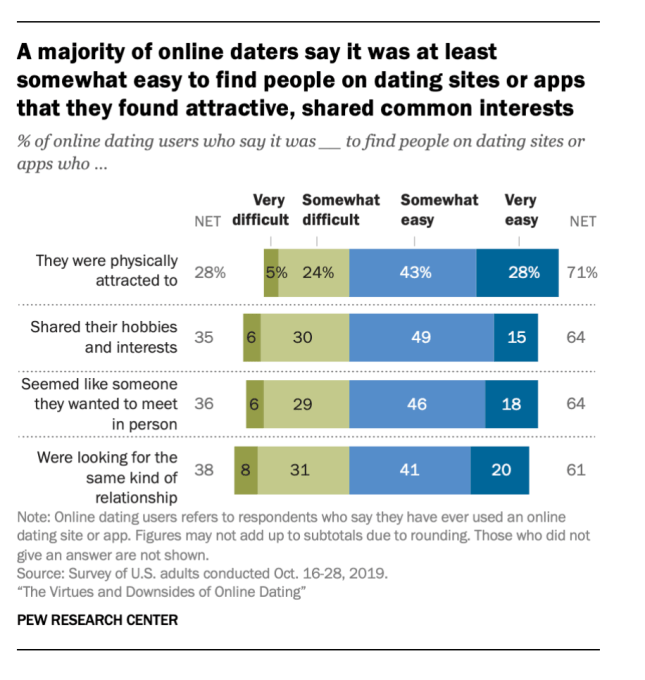 In addition, a significant portion of U.S. adults (46%) said they don’t think it’s safe to meet people through apps and dating sites. A larger proportion of women believed this (53%) than men (39%) — figures that are likely related to women being more often the target of harassment on the apps.

The full study delves deeper into dating app use and user sentiment along a number of lines, including demographic breakdowns, breakdowns by level of education, and user opinion.

Overall, the results come across as muddled. Largely, users seem fine with online dating. Many think it’s easy enough to find potential matches, even if it’s not all that safe. To some extent, users seem to have also accepted being harassed as just part of the online dating experience, given that a majority felt positively about online dating overall, despite the harassment they received.

A majority of people also believed dating apps were rife with people lying and scamming — 71% and 50%, respectively, said they think it’s very common to find these activities on online dating sites and apps.

In the end, it seems that those who found success with online dating view it more positively than those who haven’t — which is similar to how things work offline, as well.