Petnet’s smart pet feeder system is back after a week-long outage, but customers are still waiting for answers

Petnet, the smart pet feeder backed by investors including Petco, recently experienced a week-long system outage affecting its second-generation SmartFeeders. While the startup’s customer service recently tweeted that its SmartFeeders and app’s functionality have been restored, Petnet’s lack of responsiveness continues to leave many customers frustrated and confused.

Petnet first announced on Feb. 14 that it was investigating a system outage affecting its second-generation SmartFeeders that made the feeders appear to be offline. The company said in a tweet that the SmartFeeders were still able to dispense on schedule, but several customers replied that their devices had also stopped dispensing food or weren’t dispensing it on schedule. 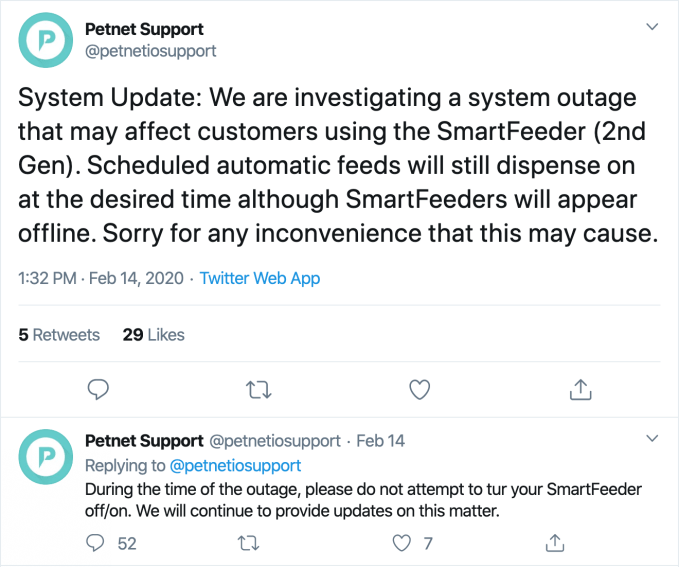 On Feb. 19, the company said that it is “working closely with our third-party service provider in regards to the outage,” before announcing on Feb. 22 that the SmartFeeders are returning online. 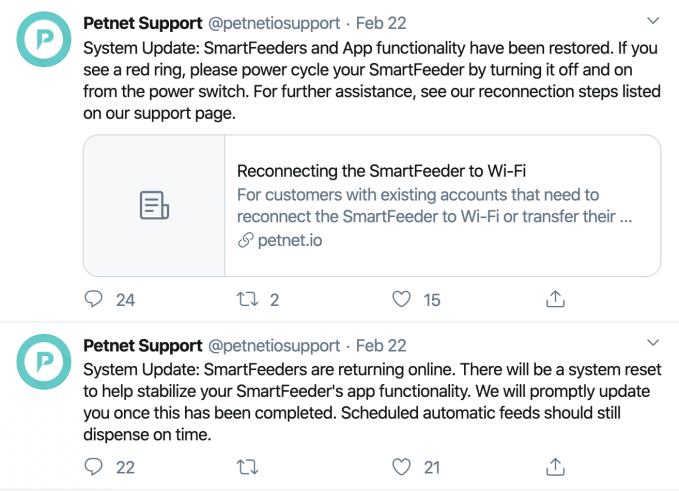 During that time, customers voiced frustration at the company’s lack of responses to their questions on Twitter and Facebook. Messages to the company’s support email and CEO Carlos Herrera were undeliverable.

TechCrunch tried contacting their emails and got delivery failure notices. A message sent to their Twitter account was also not replied to. We have contacted the company again for comment.

According to Crunchbase, Petnet.io has raised $14.9 million since it was founded in 2012, including a Series A led by Petco.

In a statement sent to TechCrunch over the weekend before Petnet said the outage was resolved, a Petco representative said “Petco is a minor and passive investor in Petnet, but we do not have any involvement in the company’s operations nor insight into the system outage they are currently experiencing.