Amazon’s dominant position in the U.S. smart speaker market will continue through this year and the next, with rivals like Google and Apple only making slight dents in Amazon Echo market share, according to a report published today by eMarketer. The analyst firm estimates Amazon will easily hold onto its top spot through 2021, when nearly 70% of total U.S. smart speaker owners will continue to use an Amazon Echo device. 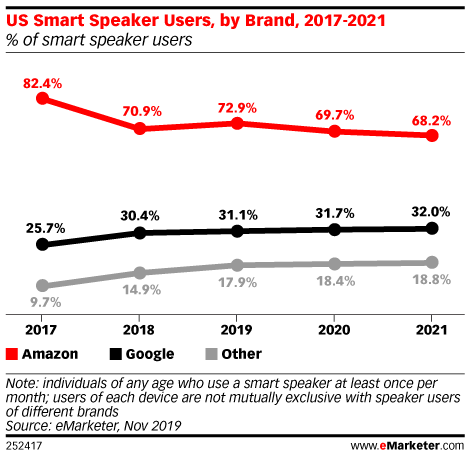 These figures indicate the challenges ahead for Apple HomePod, Google Home and others in claiming a significant portion of the U.S. smart speaker market.

After all, once a consumer buys their first device they’re not as likely to change brands for their next one. Instead, the first device gives the company — like Amazon — a foot in the door to prove their smart speaker’s usefulness. When the customer is readying to expand by adding a new device for the bedroom or kitchen, perhaps, they typically return to buy the same brand again as devices are designed to work together across the home.

That’s not always the case, but it’s more often than not.

Amazon is keenly aware of this trend and has been practically giving away its entry-level device, the Echo Dot. The low-end device is currently selling on the retailer’s site for $29.99, and is often found on sale. During Amazon’s annual Prime Day sale, the retailer slashes Alexa device prices even further — making the Echo Dot a Prime Day bestseller for several years now.

Outside the U.S., however, Amazon’s Echo may not have the same advantages, the report notes.

The Echo is less competitive in some markets because it supports fewer non-English languages than major competitors, like the Google Home.

That said, the U.S. remains a key market for smart speaker adoption, so Amazon’s strengths here should not be discounted.

“Since Amazon first introduced the Echo, it has built a convincing lead in the U.S. and continues to beat back challenges from top competitors,” said Victoria Petrock, a principal analyst at eMarketer. “We had previously expected Google and Apple to make more inroads in this market, but Amazon has remained aggressive. By offering affordable devices and building out the number of Alexa skills, the company has maintained Echo’s appeal,” she added.

The firm also said it expects the number of U.S. smart speaker users to continue to rise over the next several years, but growth will slow. Currently, 28.9% of internet users also use a smart speaker. Next year, that number is expected to reach 30.5%.

This year, the number of smart speaker users in the U.S. will grow by 13.7% to reach 83.1 million. But in 2021, growth will dip into the single digits, eMarketer forecasts.

That doesn’t necessarily mean those users aren’t using voice assistants, however. Instead, smart speakers will only be one way in which consumers interact with technology via voice. Over time, consumers will also begin to use voice assistant built into other devices, like vehicles, appliances, other smart home devices, and more. And let’s not forget that both Google and Apple offer smartphone voice assistants — Google Assistant and Siri, respectively — who’s usage numbers dwarf Echo adoption.

There are some half a billion plus Siri-capable devices out there, and half a billion Google Assistant users. In other words, people interacting with a voice assistant today are probably doing it on their iOS or Android phone, not by talking to Alexa. But on the flip side, it’s fairly remarkable that Amazon was able to create a new market for its Echo speakers, given the massive lead in voice assistants held by its rivals.

eMarketer’s report is not the first to estimate Amazon has claimed a 70% market share in the smart speaker market. A report last year by CIRP had also said the same.