My husband tested the Mountain Hardware PCT 70L backpack over seven days on the strenuous La Cloche Silhouette Trail in Ontario’s Killarney Provincial Park. He found it to be very comfortable, easy to pack, and able to carry a large load. Although he tried it on at home, he had never worn the pack before we started hiking on the trail. At the end of seven days, he pronounced it as comfortable a pack as he has ever worn in five plus decades of backpacking – and he is not getting paid to say that.

Load carrying with the pack

Unlike another review of the back I read, John found that he was able to carry a 45-pound load (minimum) with no chaffing on his hips or shoulder blades. He does say that he carries a pack lower than other people and to keep the pressure off both his hips and shoulder blades, he often puts his thumb under the chest straps. But that’s what he does with every pack – and he has been doing it for years. This one was comfortable from the get-go. He is six feet tall and never made any adjustments to the length of the pack.

Not only was it a comfortable pack, but it was very durable – withstanding the rigours of being dragged on quartzite rock at several locations along the trail. After a week it looked as good as new. But what John really loved were all the pockets so he could organize his things and not he didn’t have to spend time looking for stuff. Everything had its place. He particularly liked the fact he could strap the tent to the bottom of the pack, and it stayed in place. Note the green bag above that holds the tent.

We went past a lot of lakes on the week-long hike so finding water was rarely an issue. To keep things easy, we used my water bottles unless we stopped for lunch. John packed other space hogging items in the water bottle holders – cue the tent poles, a fuel bottle, and a camp chair. That worked well for us. He could have easily fit in a 1 L Nalgene bottle and put the camp chair inside the pack but that just didn’t happen on this trip.

A removable top lid with lots of zippers

The top lid with lots of zippers was one of the organizational features in the pack John loved. On the outside, there are two zippered pockets, so he’d put anything he wanted to easily access for the day in those. On the inside is one large, zippered pocket that held things like his flashlight and first aid kit.

The outside front compartment boasts zippers on three sides. John found it easy to pack his clothes and sleeping pad into the bottom of the pack with the zippers undone. Once it was zipped up, he’d fill the main compartment with his sleeping bag, any food he carried, toiletries and a pot set.

There is a roomy area to stuff your fleece or raincoat between the main compartment and the zippered compartment, something he did every day with the changing temperatures.

On top of that is the roomy zippered compartment itself. He put all his warm weather gear in here along with a few odds and sods.

A hydration pack that converts to a lightweight daypack

I admit that we discovered this feature of the pack once we got home, possible because neither of us ever use hydration packs. There are a couple of small hooks that keeps it in place so just remove, pull out of the pack – and you’re good to go. It takes seconds.

What he attached to the outside of the pack

On the outside of the pack, he attached a pair of waterproof camp shoes to some straps. The other thing he strapped onto the outside was a waterproof bag with his camera. It may look bulky in the photos, but it worked well.

There is a snap at the top of the large, zippered pocket that attaches to the pocket to make it a tighter package. John found the snap never stayed closed, so he gave up trying.

The pack also comes in a S/M size to fit a waist that is 29-48 inches. The torso size is significant between the two pack sizes with the S/M fitting a 16-19 inch torso and the M/L fitting a 18-21 inch torso. You can adjust by moving a velcro square – but it’s a workout to do that. Once it’s adjusted properly, you likely won’t have to do it again.

Pricing of the pack

The pack is listed for $US300 on the US Mountain Hardwear website, and $Cdn390 on the Canadian site. I think for what you get this is great value. 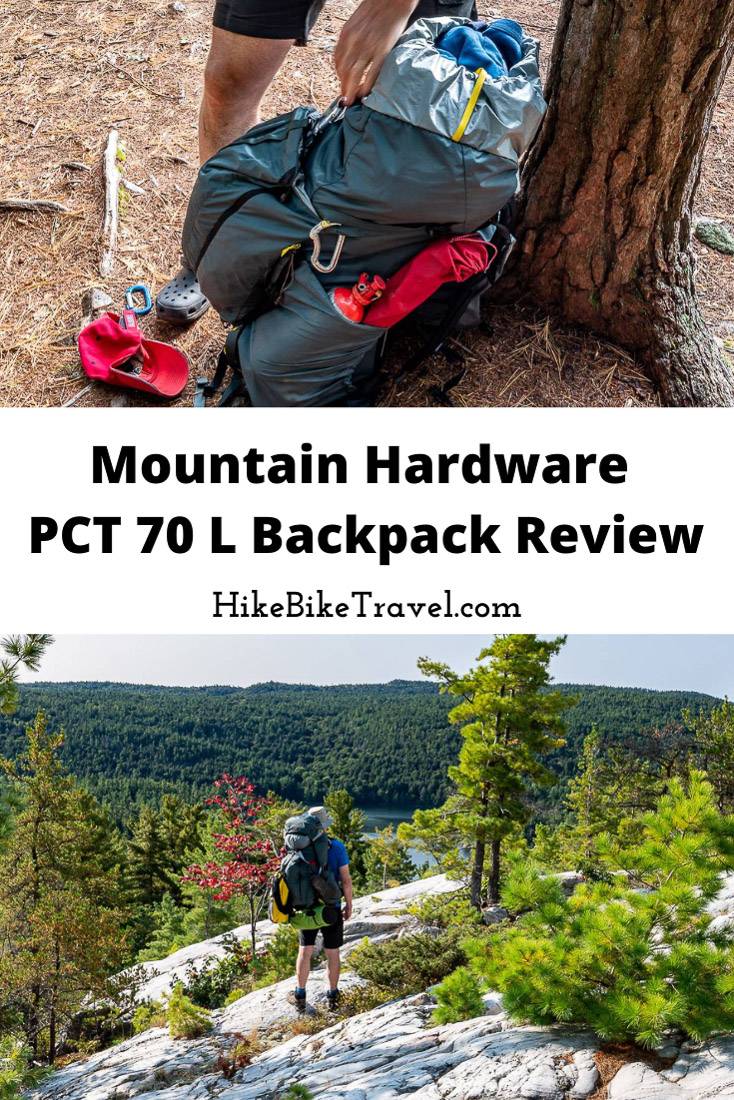