SockSoho is a direct-to-consumer brand that aspires to become the “Uniqlo of India.” The company launched sales ten months ago, starting with men’s socks, and recently completed Y Combinator’s Summer 2020 program. Founded by Pritika Mehta, a data scientist who has worked at companies including TripAdvisor, and growth marketer Simarpreet Singh, SockSoho now has more than 30,000 customers, and plans to launch into new menswear verticals soon.

Before launching SockSoho, Mehta and Singh worked together on MindBatteries, a technology and content IP provider whose corporate clients have included The Times of India, The Economic Times, Mercedes, Infosys, the World Economic Forum and Uber.

The two are relying on several factors for SockSoho’s growth: India’s position as one of the largest and fastest-growing e-commerce companies in the world and the company’s in-house technology, which will include proprietary chatbots and AI-based recommendation engines as it scales.

SockSoho launched with a multi-platform distribution strategy, selling on its on site as well as ecommerce platforms. But its main driver is WhatsApp, the most popular messaging app in India with over 400 million users. About 70% of the SockSoho’s sales happen through WhatsApp, and it also uses the messenger for marketing and A/B product testing.

Eric Migicovsky, the Y Combinator partner who invested in SockSoho, told TechCrunch in an email that SockSoho “looks like a fashion brand on the surface but at the backend they operate like a tech company. They’re A/B testing every aspect of the product and ecommerce path, not something every fashion brand does.”

“I think they’re winning strategy here is WhatsApp,” he added. “They have figured out how to acquire and service customers exclusively through the platform.” 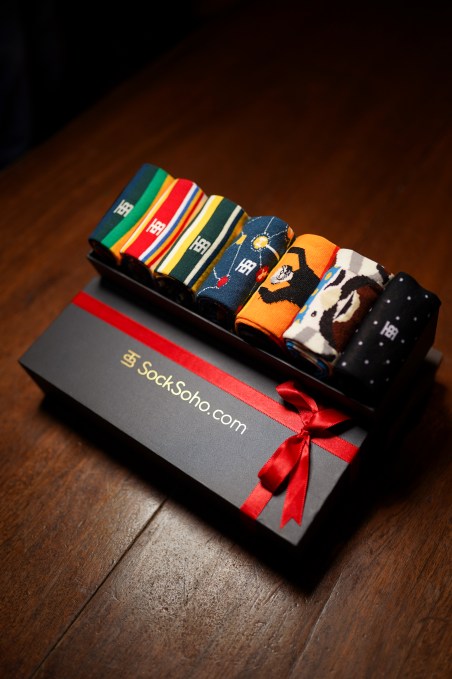 One of SockSoho’s gift boxes

Before starting SockSoho, Mehta earned a Master’s in computer science from the University of Buffalo, focusing on artificial intelligence. Then she spent several years in the United States, working at tech companies including TripAdvisor. But she continued keeping an eye on her home country.

“When I saw the growth happening in the Indian market, it looked phenomenal because the population is huge and data was becoming really cheap. There was a huge increase in people shopping online,” she told TechCrunch. “That is when I thought, what the hell am I doing in the U.S. when all the action is happening in India?”

Most online fashion brands in India focus on women, so Metha and Singh decided to go into menswear. They say there are about 200 million men living in cities in India, representing a potential $8 billion market. Before doing consumer research, the two wrote down a list of 80 items they could launch with. Socks won because they are easy to fit and ship, and have high margins and low rates of return.

Before launching new socks, SockSoho does its version of A/B testing through WhatsApp by sending design ideas to customers and gauging their interest in pre-orders before placing manufacturing orders.

Data analytics is key to reducing the cost of marketing and customer acquisition, a challenge for many direct-to-consumer companies.

“We are basically gathering data points to understand customer behavior and spending patterns, and those insights help us refine every single thing that we are building, from our designs to marketing and inventory planning, and even expanding into future verticals,” said Mehta.

Analyzing data has already revealed a couple surprises. For example, SockSoho expected almost all of its customers to be men, but about 30% of total purchases are made by women buying gifts. SockSoho’s founders also assumed that most of its buyers would live in major cities like Delhi, Mumbai and Bangalore, but its data revealed that smaller cities were major growth drivers. “All these insights came purely from data,” said Singh.

Over the last six months, 15% of SockSoho’s customers have made repeat purchases, and sales grew during India’s COVID-19 lockdown, which started in March.

“COVID has accelerated the shift of people to online shopping,” said Singh. “Like my dad, he never shopped online, but during COVID he’s even buying his toothpaste online. It’s a tectonic shift.”

“With ecommerce, it’s not just about selling the product,” she said.

To keep customers engaged, SockSoho relies on WhatsApp to share new products and customer photos. But that level of personal engagement will become more challenging as the brand grows.

This is where the proprietary technology SockSoho is developing comes into play. This includes AI-based chatbots that can handle simple queries, like exchanges. For example, a customer who receives the wrong item will be able to upload a photo and get a replacement shipped to them. More complicated issues will be be flagged for human customer representatives.

“We are building this proprietary software inside the company, which can actually replicate the human experience. We are collecting all the data, all the interactions that are happening currently with customers to understand the language, the data and the kind of experience they like,” said Mehta.

SockSoho is also developing its own AI-based recommendation engine, that will show customers products they are likely to be interested in based on their browsing and shopping habits. The startup isn’t revealing yet what verticals it will expand into next, but it is already doing A/B testing for its next product lines.

“Once we have built our tech stack, our whole supply chain and nailed down the socks, it will be very easy for us to go into any other vertical and eventually become the Uniqlo of India,” said Singh.