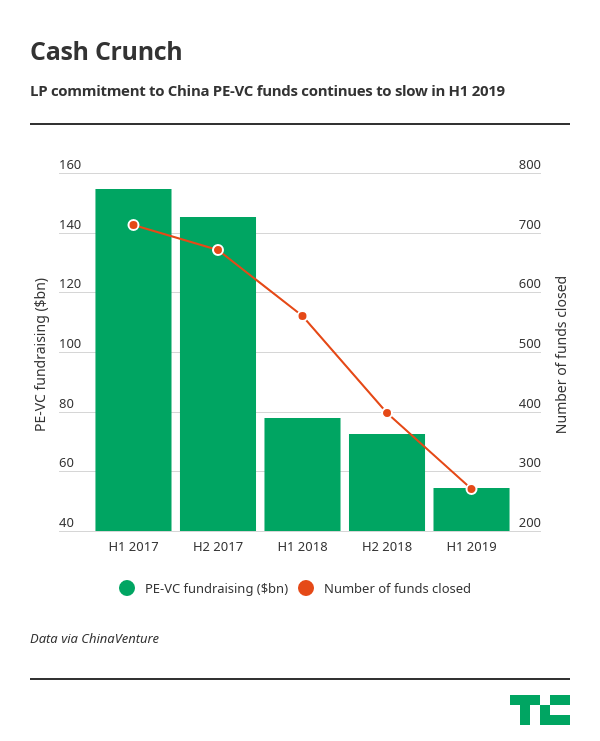 China’s deal-making activity for startups in the six months ended June halved from a year ago to 1910, according to data from consulting firm ChinaVenture’s research arm. The amount invested in domestic startups during the first half of 2019 plummeted 54% to $23.2 billion.

The slide in startup investment comes as the money behind the money shrinks amid a cooling economy in China that is exacerbated by a trade war with the U.S. Fundraising for investors was already showing signs of slowdown a year earlier. In the first half of this year, private equity and venture capital firms in China secured 30% less than what they had raised over the same period a year ago, amounting to a total of $54.44 billion. 271 funds managed to raise, down 52%.

That money from limited partners is also flowing to a small rank of investors. 12 institutions accounted for 57% of all the capital landed by VCs and PEs in the period. Investment coffers that have gotten a big boost include the likes of TPG Capital, Warburg Pincus, DCG Capital, Legend Capital, and Source Code Capital.

Healthcare was the most backed sector during the six months, although proptech startups scored the biggest average deal size. Some of the highest funded companies from the period were artificial intelligence chip maker Horizon Robotics, shared housing upstart Danke and China’s Starbucks challenger Luckin.