Brian Evenson is best known as an author of literary horror, but his new short story collection Song for the Unraveling of the World also features a healthy dose of science fiction.

“A lot of my collections are kind of on the boundary between literature and genre, and that’s kind of the case in this book as well, but I think it moves even more into genre in some ways,” Evenson says in Episode 388 of the Geek’s Guide to the Galaxy podcast.

Evenson was largely disconnected from the science fiction scene until 2004, when his collection The Wavering Knife received an award at the World Fantasy Convention.

“I read the other people who were up for that award, and started to move from there to other sorts of writers, and quickly I realized that there’s as much interesting stuff going on on the genre side of the literary/genre divide, and there’s good and bad work on both sides,” he says.

He has since become more heavily involved in the science fiction community, building friendships with authors such as Jeff VanderMeer and Kelly Link. “If I go into a genre setting and I’m talking to somebody, they’ll know a lot about different science fiction writers, but they’ll also know literary classics, and they’ll have some idea of contemporary fiction,” Evenson says. “If I go into a literary setting, I find it’s much more limited in terms of what people are likely to know. And it’s not that they’re not smart people there, but I think there is sometimes a resistance to moving outside of boundaries that seem safe.”

Evenson began to fully embrace his inner sci-fi geek in 2008, when he wrote the officially licensed movie tie-in novel Aliens: No Exit.

“I just realized I could do it in a way that would be interesting to me, and it could pick up on some ideas and themes that I have in my other work, and also could be fun in a whole different way,” he says.

Listen to the complete interview with Brian Evenson in Episode 388 of Geek’s Guide to the Galaxy (above). And check out some highlights from the discussion below.

“I used to have this professor at BYU who would tell me, ‘These [horror stories] are all very nice, but maybe you could just imagine your best friend getting a girl pregnant, and then write that story. That’s what really matters.’ And I just didn’t ever see the point of that. So I kept stubbornly doing what I was interested in, which is something with a fantastical element, that was speculative to some degree. The first review I got from a major press [outlet]—for my first book, a book called Altmann’s Tongue—was from the Los Angeles Times, and it essentially said, ‘There’s some talent in this book, and this will be a good writer once he stops doing all this dark stuff.’ But I think what happened is I just kept on doing it for a couple decades, and eventually people were like, ‘Oh yeah, he’s the guy who does that.’ They got used to it. They just got acclimated to me.”

“I was into the game, and I thought the sensibility of the game fit my sensibility—because I feel like even when I’m writing science fiction, there’s a strong horror element to it. So I wrote a proposal and sent it to [the developer]. At the time they were still making Dead Space games—I think Dead Space 2 had just come out—so they had to show it to that whole team of writers there. I had done things with my proposal where I had suggested changing a major piece of lore in Dead Space, having to do with Michael Altman, this central character who’s always talked about in the game. And I thought, ‘They’ll never go for this,’ but they were into the idea, and they were super cool, and they were like, ‘Yeah, we can see how this could actually work, and how we could reveal the same thing in the game.’ And then we just started writing.”

“Suddenly I thought, ‘Wait, this means you’re saying that if I [write horror], you’re going to fire me?’ And so the next six months or so was a long process of trying to get them to give me a straight answer about that, and in the end it finally became clear that not only was I likely to get fired if I stayed there, but it was even more complicated, because at the time I was still Mormon, and I was likely to eventually lose my membership in the church. It was a tough decision for me to know what to do with that, because I had two young kids and we’d just moved to Utah. Eventually all this information came out and was public, and once it was I did a couple of magazine interviews. In one of the interviews, the photographer who was taking pictures of me actually knew about a job in Oklahoma, and suggested I apply for it, even though the deadline was gone. And I got that job, and ended up leaving.”

“I was teaching at Brown at the time, and we kind of felt—at Brown—that if you’re taking a creative writing class, then that’s kind of your trigger warning. You’re taking a creative writing class, and things can be talked about and things can happen, and that if you start giving these trigger warnings at the start of a piece, it really changes the way you take the piece in. You start paying attention to things differently, you start reading the piece to see the trigger warning, or you’re braced against it. And that maybe it does as much to kind of cover up a problem that needs to be addressed—and talked about with a professional—to have these trigger warnings as it does to resolve anything. So [my short story] kind of started with that.” 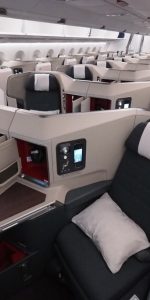 Rapid Huawei rip-out could cause…

Want To Get Back Into…

Nutritionists Rank The Best and…

As U.S. Grapples With Virus,…