The next-gen flavor of mobile connectivity, 5G, is now live in 24 markets globally, per global mobile industry association the GSMA — which has just published its annual state of the global mobile economy report.

The cutting edge network tech is capable of supporting speeds up to 100x faster than LTE/4G and delivering latency of just a few milliseconds, as well as being able to connect many more devices per cell site — which means that, as it rolls out, it’s expected to underpin a new wave of ‘smarter’ digital services which bake in real-time AI assistance and help drive the digitization of legacy industries.

In last year’s report the carrier association didn’t break out a firm figure for markets where 5G is live — but dubbed the tech “a reality” after commercial launches in the US and South Korea towards the end of 2018. It also said it was expecting 16 more “major countries” to have launched 5G networks by the end of 2019.

As it stands actual 5G connections remain a fraction of the connectivity pie vs current (4G) and previous gen cellular favors. Per the report, 4G became the dominant mobile tech globally in 2019 — with over 4BN connections, accounting for 52% of total connections (excluding licensed cellular IoT).

The GSMA expects 4G connections to continue to grow for the next few years, peaking at just under 60% of global connections by 2023.

For 5G its forecast is that it will account for a fifth (20%) of global connections by 2025, with the carrier association expecting “particularly strong” take-up across developed Asia, North America and Europe. 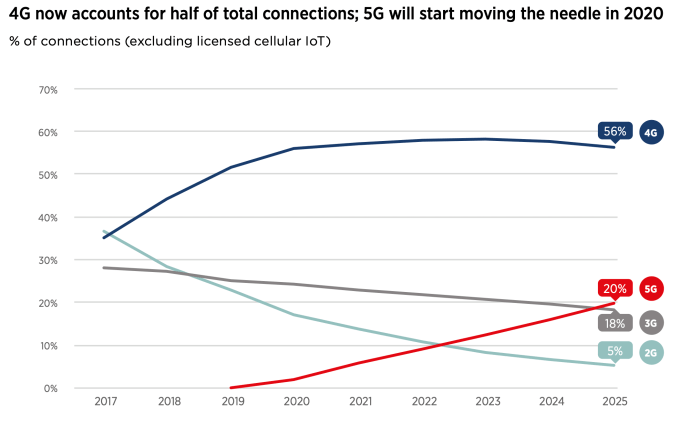 It’s worth emphasizing that the presence of 5G in a market does not mean universal coverage.

On the contrary, 5G rollouts have tended to be targeted on urban centers. Which means 5G availability in the 24 markets that have launched commercial networks so far is likely highly limited vs population. There are also still relatively few 5G smartphones vs non-5G handsets (though since this time last year more are being unboxed; Sony, for example, just announced its first 5G handsets).

Perhaps, most importantly, consumer demand for the next-gen flavor of connectivity has yet to be robustly stood up. The GSMA’s report poses the (existential, for telcos) question of: “Will they pay for it?”

“The number of live 5G markets is increasing by the day and consumers’ awareness of the technology is also growing as hype makes way for reality. However, there is wide variation across the globe in terms of intentions to upgrade to 5G and the willingness to pay more for it,” it concedes.

“In general, consumers in South Korea and China – having witnessed some of the earliest launches – appear to be the most excited by the prospect of upgrading to 5G, while those in the US, Europe and Japan seem more content with 4G for the time being,” the GSMA adds, before striking an upbeat note: “5G is still in its infancy though; as more tangible use cases are deployed, more consumers will appreciate the benefits of 5G.”

Aka, 5G needs a killer app. But one has yet to emerge. (Edit note: A global pandemic that triggers a mass transition to remote working and virtualized socializing could have potential though. After all, concerns about the corona virus did force the GSMA to cancel its own annual shindig, MWC, just last month.)

Despite the report’s prediction that consumers will, down the line, be sold on 5G’s “benefits” another graphic in the report maps out the current reality — that “awareness of 5G does not necessarily translate into an intention to upgrade”.

It shows adults in markets including the UK, Australia, Spain and Italy having high awareness of the tech but low intent to pay for 5G, with less than 35% saying they want to upgrade. The US market also has a similarly high level of awareness of 5G — and only a slightly higher intention to upgrade (~40%+).

The GSMA writes that more needs to be done by carriers to “raise awareness” of other “benefits” than just higher data speeds, touting claimed advantages such as “improved mobile service coverage”, “innovative new services” and “connectivity for previously unconnected devices” as having 5G marketing potential.

However, on the latter point at least, the report also chronicles variable and often low appetite — certainly outside China — for a range of ‘smart’ devices… 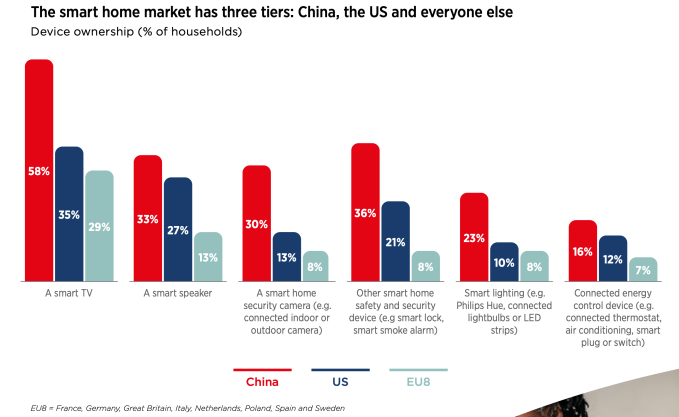 Still, the GSMA predicts billions more IoT devices will be coming on stream over the next five years — saying that between 2019 and 2025 the number of global IoT connections will more than double to almost 25 billion, while it expects global IoT revenue to more than triple to $1.1 trillion.

Another segment of the report deals with the perennial issue of stagnant operator revenue growth vs Internet companies, with the GSMA noting telcos continue to lag tech giants and major device makers.

“For many operators, revenue growth as a percentage is in the low single digits, if that,” it writes. “As core telecoms revenue stagnates, a common strategy now for major operator groups is to seek revenue growth from adjacent services. Pay TV, media, IoT, enterprise solutions and the broader array of digital services still only account for a minor share of operator revenues (10–20% for most), although there are a few notable exceptions, largely enabled by M&A activity.” 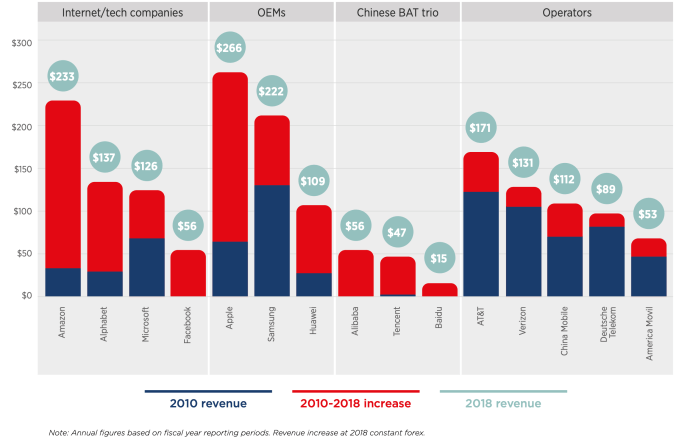 It’s perhaps no surprise, then, that top of the GSMA’s 2025 prediction/wish-list is a bold one that one of the GAFA companies (Google, Apple, Facebook and Amazon) will be broken up. (It makes not suggestion of which — though plenty of American eyes are now on Google.)

Other near-term hopes on the GSMA’s list are that “AR eye glasses reach the mass market with a form factor from at least one global OEM”; health wearables become “part of the solution to overburdened public health systems”; and “private enterprise networks explode and become a battleground between telcos and cloud companies” (we don’t think they mean explode literally).

There’s also another 2025 prediction for 5G — that the technology becomes “the first generation in the history of mobile to have a bigger impact on enterprise than consumers”.

Which is certainly one way to silver-line a low-demand ‘cloud’ and hedge (hopefully) for business buy-in to make up for lacklustre consumer desire to pay more to do the same stuff slightly faster* (*depending on network conditions).

“Governments and regulators must play their part to help propel 5G into commercial use by implementing policies that encourage advanced technologies (e.g. AI and IoT) to be applied across all economic sectors,” the GSMA writes elsewhere in the report — a call to action that aligns exactly with policy priorities recently set out by the new European Commission, suggesting telco lobbying in Brussels has borne fruit.

Thierry Breton, the Commissioner for internal market — who’s now driving a pan-EU strategy to encourage the pooling and reuse of industrial data that leans heavily on the deployment of what’s he’s called “critical” 5G networks — is also a former chairman and CEO of France Telecom.